The WTO has been issuing the outcome of the MPOWER project assessing the implementation of monitoring, protecting, offering help, warning, enforcing bans and raising taxes every other year to support an anti-tobacco campaign around the world.

South Korea was not properly implementing policies on protecting, enforcing bans and raising taxes, according to the WHO Report on the Global Tobacco Epidemic 2017 released on its Web site Monday.

“Subnational jurisdictions have the authority to adopt laws that ban tobacco smoking in any or all of the places mentioned above. However, no subnational laws have been reported,” the report said.

It also cited a lack of “subnational jurisdictions” that “have the authority to adopt laws that ban some or all types of tobacco advertising, promotion and sponsorship mentioned above.”

The WTO calls on member states to ban smoking at all public places to prevent damage from second-hand smoke.

South Korea has been expanding nonsmoking zones in public places for the past few years but such measures have fallen short of legislating a far-reaching ban.

South Korea, meanwhile, has been properly implementing four other areas in monitoring, offering help, warning and enforcing bans on smoking, the report said.

The government mandated tobacco companies place graphic images showing the harmful effects of smoking on the upper part of cigarette packs in 2016.

It moreover came up with a new rule earlier this year to require the pictorial warnings to occupy more than 30 percent of the front and back of cigarette packaging.

The graphic warning images must be placed on packets of e-cigarettes as well as chewing tobacco. 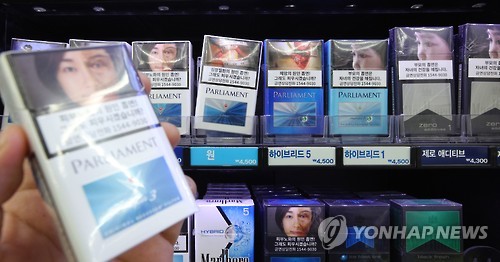