The TV series “Hospital Ship,” starring Ha Ji-won and Kang Min-hyuk, a member of boy group CNBLUE, has ranked as the second most popular program on the Content Power Index (CPI) for Aug. 28-Sept. 3, with a score of 257.5.

Among a sea of medical dramas that aired in the past, this one differentiates itself by taking place on a floating hospital ship that travels around islands that lack health care facilities.

Actress Ha, who debuted in 1996, plays the role of a doctor — level-headed, talented doctor Song Eun-jae with an intriguing past — for the first time. CNBLUE member Kang, though much younger than Ha, demonstrates a great chemistry with Ha as a junior doctor.

The index, created by CJ E&M and Nielsen Korea, measures the level of popularity and influence on consumer behavior of all entertainment TV programs aired on major territorial networks and cable channels during prime time. 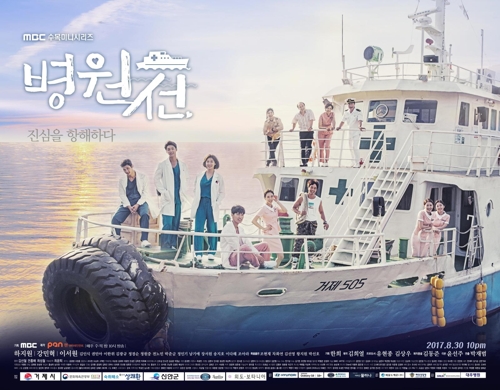 ‘A Taxi Driver’ to open in North America, Australia, Britain next month