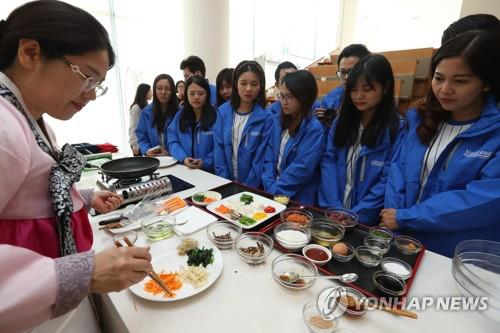 According to the Korea Tourism Organization (KTO), 66.3 percent of the 974 people surveyed in February said they were satisfied with Korean food, with 31.4 percent saying it was “alright” and 2.3 percent expressing dissatisfaction.

Among those that complained about local food, 46.1 percent cited the spiciness as a problem, with 29.2 percent saying the food was too expensive.

Others pointed out a certain smell as detracting from the overall experience, with some complaining about the cleanliness of the eateries they visited.

On the positive side, 87 percent of tourists who enjoyed eating the local fare said they liked the taste, with bulgogi, a grilled marinated beef dish, being their favorite, and samgyeopsal, a pork belly dish, coming in second.

The latest findings also showed many foreigners had a hard time finding restaurants they could use, with some citing problems in communication with serving personnel and details on the food as taking away from the generally favorable experience.

S. Korean women see themselves chubbier than they are: survey

‘A Taxi Driver’ dethrones ‘The Battleship Island’ on opening day