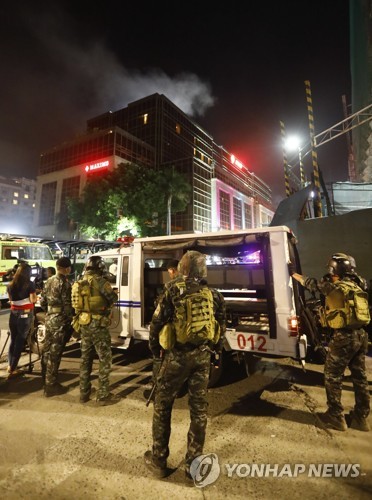 SEOUL, June 2 (Yonhap) — One South Korean died and five others were injured in a shooting attack at a hotel in Manila, Seoul’s foreign ministry said Friday.

Foreign media reported that a gunman barged into a mall at the Resorts World Manila early Friday and fired shots multiple times toward a large TV screen before he poured gasoline on gambling tables and set them on fire.

A South Korean man, presumed to be in his 40s, was found dead outside of the resort, the ministry said, citing an on-site report from two diplomats in the Philippines.

The man is believed to have died from a heart attack while running away from the gunman, it noted.

Five other South Koreans sustained minor injuries, two of whom have already been discharged from hospital, the ministry said.

The South Korean victim was among 36 bodies found at the site, most of whom likely died from suffocation, local authorities were quoted as saying earlier.

The Manila police said that they had no evidence to indicate it was a terrorist attack, saying they believed it to be a robbery.

The suspect stole casino chips worth about 110 million pesos (US$2.27 million) and fled the scene. He was later found dead in a room of the same hotel, apparently after committing suicide.

Hundreds of people flocked to the exit to escape, causing chaos. Some 54 people have been treated for injuries so far.

The South Korean Embassy has dispatched two officials to the scene to determine if any additional South Korean nationals were hurt, official sources said.

Girl group BLACKPINK to debut in Japan this summer

Where is the best place to cook shrimp in Seoul? [Card News]

The character who travels every day, “Hijjeomi” [Card News]