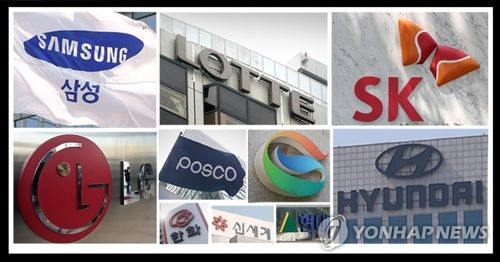 SEOUL, May 31 (Yonhap) — Nearly half of the top 30 conglomerates in the country in 2000 either fell out of the rankings or have been dissolved, with only Samsung Group firmly entrenched in the No. 1 position, an analysis showed Wednesday.

Corporate tracker CEO Score compared the top 30 business groups of 2000 and those in 2016 in terms of state-appraised assets. Over the 17-year period, 13 conglomerates lost ground in terms of status or disappeared altogether from the list, according to the analysis.

Twelve of them steadily maintained their status in the top 30, while six — POSCO, Hyundai Department Store, OCI, Hyosung and Young Poong — got back on the list after dropping out midway.

Shinsegae Group stood out in its climb up the ladder, rising from 24th place in 2000 to 11th last year. CJ Group went up four spots, while Lotte, Hyundai Department Store and OCI all gained three notches each.

In contrast, seven conglomerates fell in their rankings. After a managerial battle between the brothers of the owner family in 2010, Kumho Asiana’s ranking went from ninth to 19th. Hanjin Group dropped from sixth to 14th after its shipping affiliate went bankrupt last year.

For Hyundai Group, its sales of financially weakened affiliates put it out of the top 30 list last year after it stood at No. 2 back in 2000.

Ssangyong Group was virtually dissolved from the repercussions of the 1997 foreign exchange crisis that forced it to sell a number of its subsidiaries.