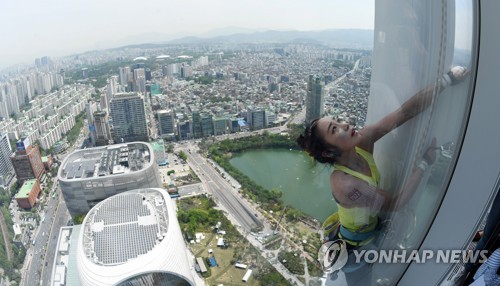 SEOUL, May 20 (Yonhap) — South Korean climber Kim Jain on Saturday conquered the country’s highest building to become the first woman to achieve the feat with her bare hands.

At an event to celebrate the opening of the 123-story Lotte World Tower in southern Seoul, she reached the top of the building after about two hours and 30 minutes without the help of footholds.

“It was difficult as the holds I was using for climbing were getting narrow when I went up higher,” said Kim after finishing the performance. “I tried to enjoy it.”

Six years after breaking ground, the 555-meter high skyscraper is now the world’s fifth-tallest building after the Burj Khalifa in Dubai, the Shanghai Tower, the Makkah Royal Clock Tower Hotel in Saudi Arabia and One World Trade Center in New York, according to the event organizer, Lotte Corp.

The 28-year old climber is a top-class athlete in the sporting field, claiming the Asian Championships title for 11 straight years and winning world cup trophies for 25 times.