“We feel pleasure as well as pain from living in a capitalist world. We sometimes feel stressed and tired. I made this film out of the idea that animals would feel the same way,” the helmer said during a news conference for the film.

“Okja” has raised a lot of attention from news media and movie fans for being the follow-up to Bong’s acclaimed sci-fi thriller “Snowpiercer” and the first Netflix movie chosen to premiere in the Cannes’ official competition section.

The film made a screen debut during its official press screening that preceded the news conference at the 70th edition of the festival. Many reporters from around the world attended the press event to press various questions to the director and the cast for about an hour.

Co-written by Bong and Jon Ronson of “Frank,” Okja follows a girl from a rural town who risks everything to prevent a multinational company from kidnapping her close friend and super-pig named Okja. The sci-fi film was co-produced by three Hollywood studios — Plan B, Lewis Pictures and Kate Street Picture Company — while Netflix covered the film’s entire budget of US$50 million. It stars Tilda Swinton, Jake Gyllenhaal of “Nightcrawler” and “Everest,” and Paul Dano of “Love & Mercy” and “12 Years a Slave,” and has Korean actors such as An Seo-hyun, Byun Hee-bong, Choi Woo-shik and Yoon Je-moon among its cast. 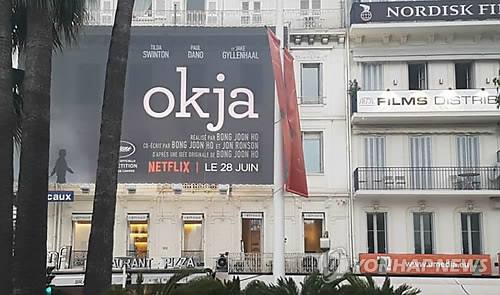 After the screening, “Okja” drew mixed reviews from reporters with some saying it depicted the friendship and adventure of the animal and the girl as well as containing socially conscious satire with original visuals. Some others said it was “a little bit boring.”

As for questions that the film is reminiscent of works by Japanese director Hayao Miyazaki, one of the world’s most popular and influential animators, Bong said, “It would not be easy for contemporary creators to get out of Miyazaki’s shadow while talking about nature and life. But I wanted to go a step further and tell the story of animals, life and capitalism through this film. I think this area was not covered by Miyazaki.”

In the film, the super-pig is a creature hiding from corporate greed, and companies use the animal and the girl to better their images.

When asked about the technical glitch that caused a brief stop in the screening of his film during the press event, Bong smiled and answered, “Such a thing happens a lot in film festivals.”

The movie was temporarily misframed on the screen at the start of the debut screening, leading to jeers and whistles from the audience. The screening was briefly stopped so that the problem could be fixed and the movie restarted. The festival authority later issued a statement taking responsibility for the problem and apologizing to the filmmakers.

The stop was first seen as being due to the jeers from some audience members opposing the Netflix logo’s presence at this year’s event.

Cannes recently changed its rules to exclude films without a commitment for a French theatrical release from next year, facing strong protests from the local film industry against the Netflix movie’s advance to the Cannes’ competition category of the 70th edition of the festival.

As for his first work with the U.S. video streaming service, Bong said, “I loved working with Netflix, they gave me total freedom in terms of casting, shooting and editing. There were no restrictions on their part. It was a wonderful experience.”