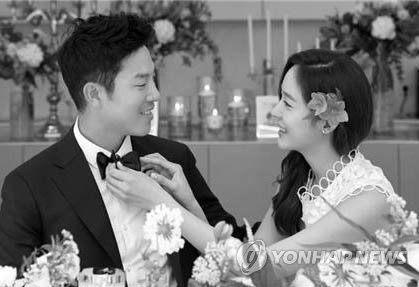 SEOUL, May 16 (Yonhap) — Singer-turned-actress Sung Yuri and her pro-golfer boyfriend Ahn Sung-hyun got married in a private ceremony at an undisclosed place, her agency said Tuesday.

“Sung Yuri and Ahn Sung-hyun, who have been in a close relationship for four years, married in the form of family worship with their immediate family on Monday,” SLent said in a release.

The agency said it was unable to announce the marriage in advance “according to the will of the two people who wanted to focus on each other in a calm atmosphere and to have quiet time together.”

It unveiled wedding photos of the couple.

Sung wore a sleeveless wedding gown decorated with lace and frills and Ahn a robe that matches a bow tie.

“I’m very sorry for not announcing my marriage out of a mind to spend the day in a quiet and holy manner,” the actress said in a handwritten letter uploaded to her Internet fan cafe on Tuesday. “I am now in another starting point of my life with a companion. We will live happily and beautifully with respect and consideration for each other… As an actor, I’ll make more efforts to give you joy and happiness with good work in the future. I thank you, am sorry and love you.”

Debuting as a member of now disbanded K-pop girl group Fin.K.L in 1998, Sung later turned to acting. Her latest work is the MBC TV drama series “Monster” that was broadcast last year. She will stick to her acting career even after marriage, according to the agency.

Ahn has been working as a professional golfer since 2005 and is now coach of South Korea’s national golf team.

TWICE’s Japanese album ranks at No. 2 on Oricon chart

Korean food festival due in Hanoi on Oct. 27-29