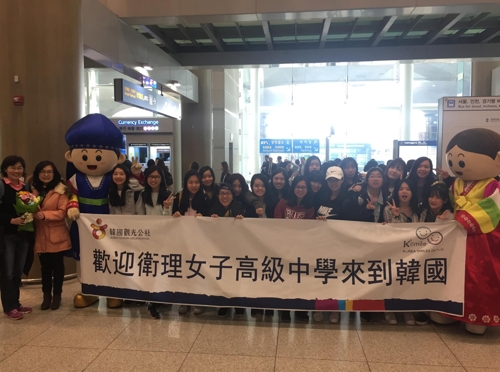 SEOUL, May 12 (Yonhap) — South Korea has seen a sharp gain this year in the student inflow from Taiwan and Hong Kong who came here on a school trip, amid a faltering tourism stemming from a steep decline in Chinese visitors, government data showed Friday.

The cumulative number of student groups on school trips from the two neighboring countries stood at 1,186 as of May 8, already nearing the annual total of 1,407 tallied in the previous year, according to the data by the Korea Tourism Organization (KTO).

Taiwan and Hong Kong had not been key markets for Korea in terms of educational tourism, until the government and industry stepped up their drive to bring more of them into the country from early this year as part of a diversification strategy, the KTO said.

Such efforts came on the heels of China’s ban on trip sales to Korea in March, in an apparent act of retaliation for the deployment of the U.S. anti-missile system, or THAAD, on the Korean Peninsula despite its strong objection.

The hostile measure by Beijing has slashed Korea’s Chinese inflow by 40 percent in March alone from a year earlier, with the aggregate tally dipping about 9 percent on-year during the January-March period.

With the Chinese vacuum expected to continue at least for the first half, the government and related industries that depended heavily on Chinese demand have been bolstering promotions and campaigns for other markets besides Asia’s biggest economy to ride out a difficult time.

The KTO has pinned hopes on growing schoool trips from Asian neighbors as an alternative to the falling Chinese tally on the likelihood that they revisit in the future since the foreign students tend to build a positive impression on Korea.

Most of the students on a school trip come on a five-night stay with a scheduled visit to their sister school in Korea, touring key heritage and tourist sites like Gyeongbok Palace and Namsan Tower in Seoul. Other itineraries may include visiting a few other tourist hotspots in provincial areas on the outskirts, the KTO added.

1 out of 5 workers not going on summer vacation

TV series ‘Kill Me, Heal Me’ sold to European distributor for possible remake

‘A Taxi Driver’ to open in North America, Australia, Britain next month